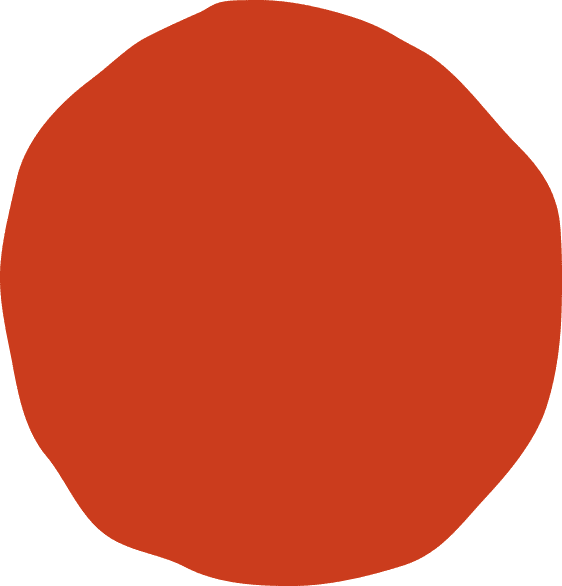 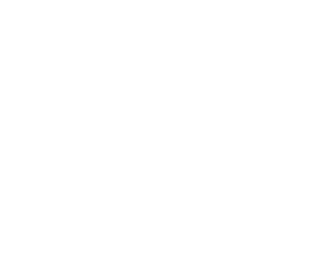 Discover one of the most beautiful medieval sites in Ardèche : Saint-Montan, a unique example in France

The town of Saint-Montan has an extremely rich archaeological and historical heritage. All periods are represented Neolithic, Bronze and Iron Age, Gallo-Roman and feudal periods.
But what makes the character of the village today is the whole castral.

The legend tells us that in the 5th century lived in Laon a pious character called “Montanus”. His reputation for holiness was great He would have lived 30 years in the cave of the “Val Chaud”; a life of solitude, prayer and penance. Then he was discovered by hunters and received the visit of Saint-Rémi and John, bishop of Viviers, who asked him to settle in a more accessible place (the current place of the San-Samonta chapel). The influx of visitors forced him to leave the country and he retired to La Fère, in Picardie, where he was said to have died and where his relics were kept.

The feudal castle and the Castrai village

The castle, built on the rocky spur of the rock of Agache will constitute the starting point of the current village. It was impossible to design a village around the church of San Samonta, the configuration of the land did not lend itself to it.
According to the present state of archaeological research, “we know that the primitive building was the present central building; it was a dungeon and its construction seems to have been for a strictly military purpose in the 13th century. Then in the thirteenth century the castle was extended towards the ridge with new constructions having a residential vocation. Then over the centuries the habitat developed on the rocky slopes that dominates the castle. As these extensions were made, the ramparts were enlarged to ensure the protection of the houses.
In the 15th century the Castrai village will reach the banks of the two streams, encompassing the chapel of the castrum its total area is 2 hectares. It will then be surrounded by an important regularly drawn enclosure, which exists for the most part still today. It is still penetrated by three main doors whose last remodellings date from the sixteenth century.
The family with the surname “De Saint-Montan” could be the origin of the castle (written mention since 1110). However, at the end of the 13th century, Saint-Montan was a co-lordship.

Shared between several lords, the castle and its annexes, after the destruction of the wars of religion in the sixteenth century, knew a progressive disaffection (especially after the passage of Admiral Coligny in the pay of the Protestant army, strong of an army of about 3,000 men and 400 horses).

The whole of the village will remain inhabited until the 1880s then the houses will be abandoned little by little, as the disappearance of the people living there, until its renewal and reconstruction, begun in the 1970s by the Association of Friends of Saint Montan. 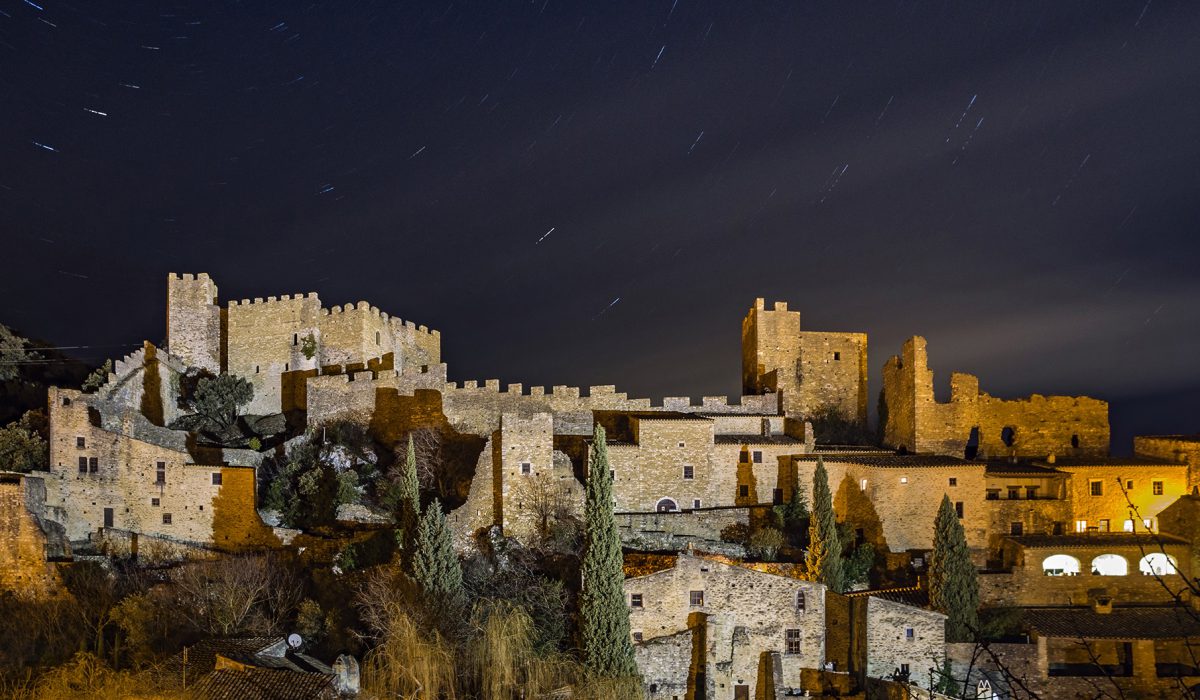 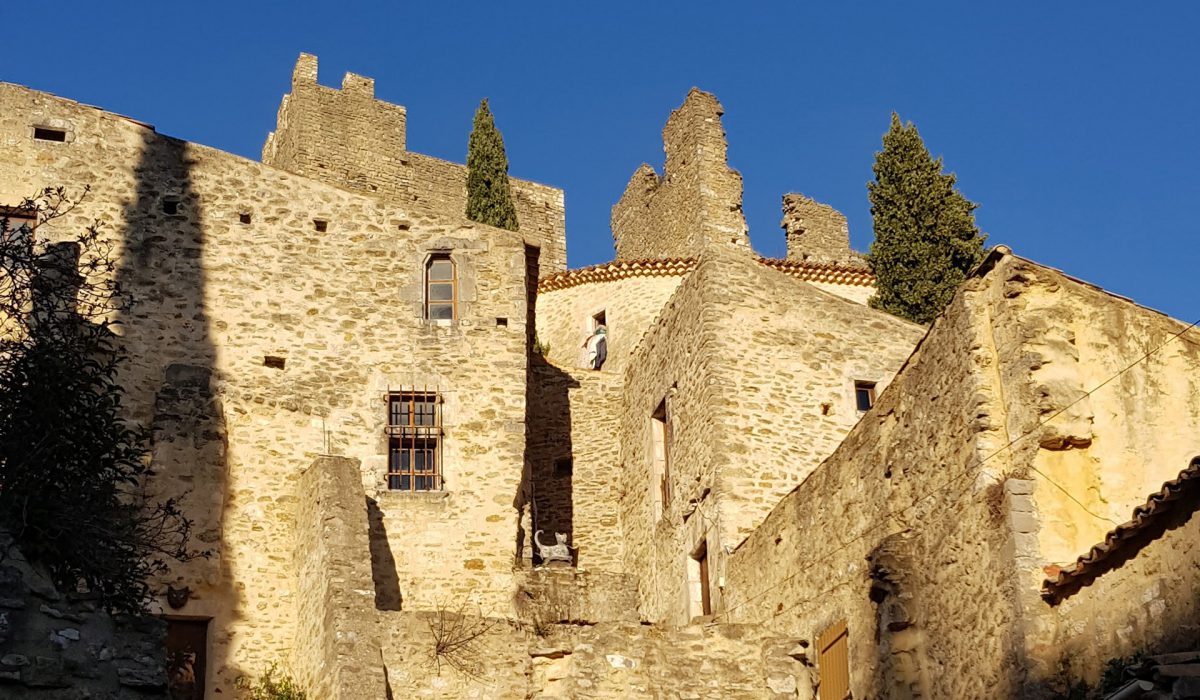 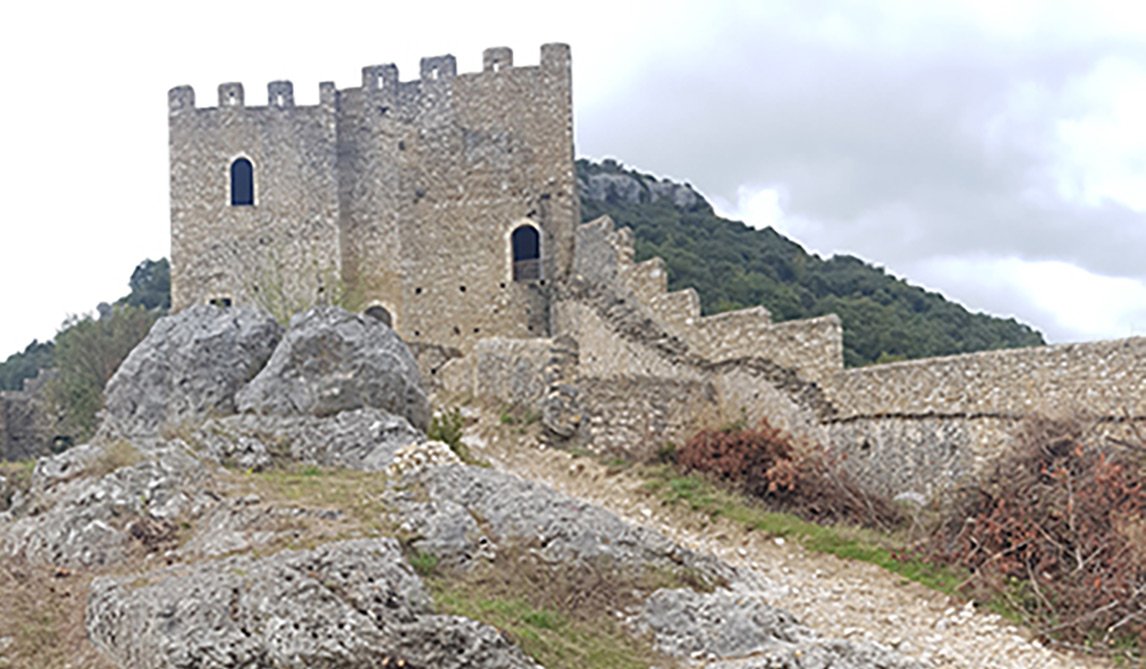 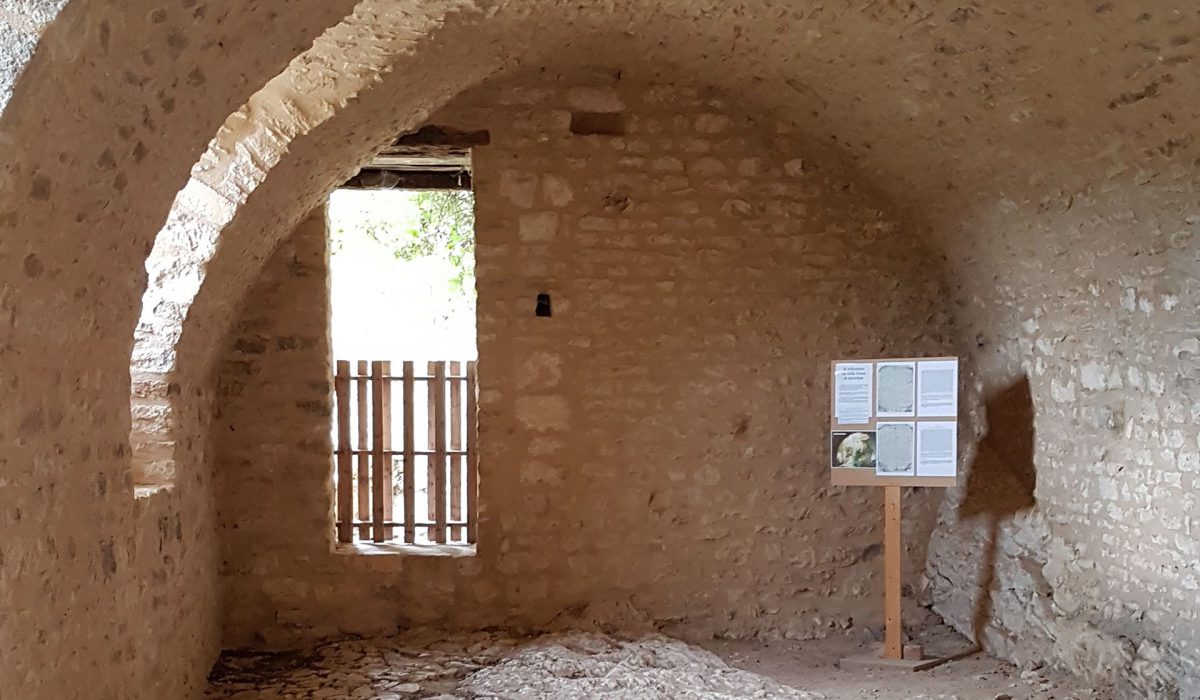 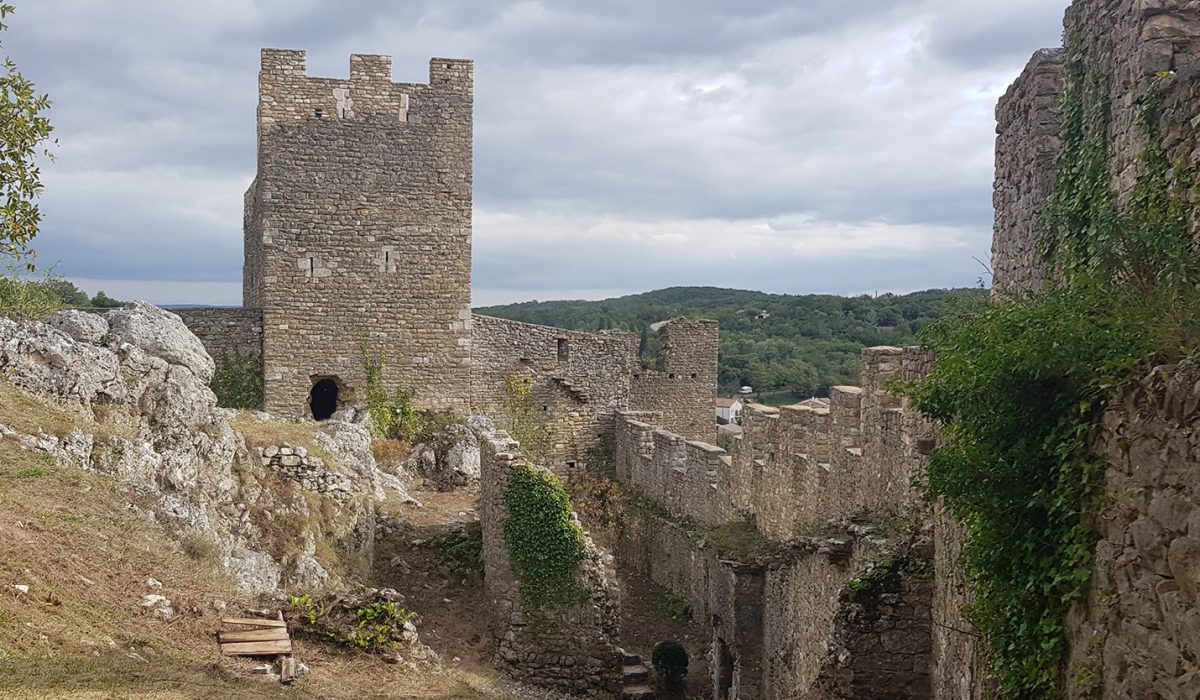 Our village conceals many surprises and points of curiosity! Let yourself be guided through the winding alleys and discover a heritage rich in stories and mysteries! Here is some information on the points that will guide your route, in the village and its surroundings. 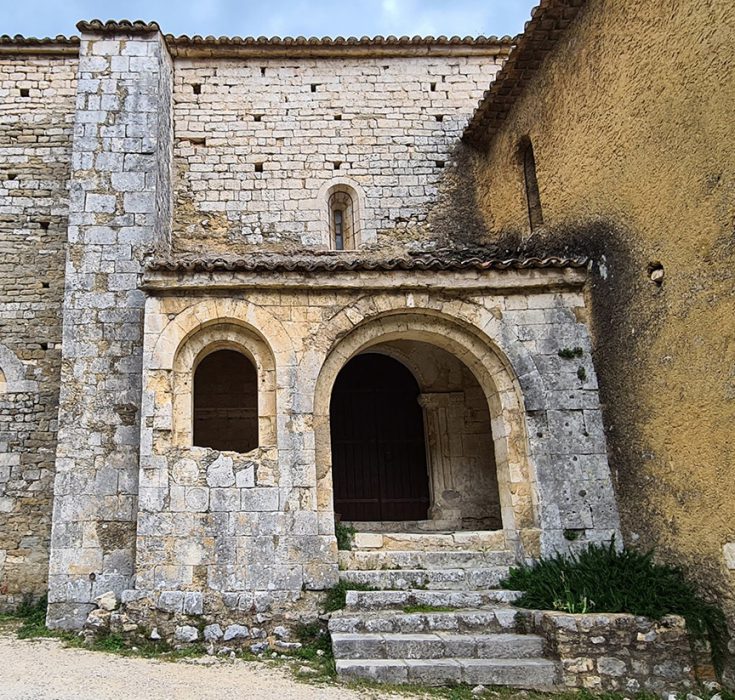 Built between the 11th and 12th centuries on the site where Saint Rémi, bishop of Reims, would have come to meet the hermit Montanus.

The church is located at the exit of the village, in the direction of Larnas. According to the legend about the location of the second residence of Montanus. It is in his honour that a chapel was built. The current building consists of two distinct parts: a chapel of the 10th century and a Romanesque church of the 12th century. The small chapel has undergone some small modifications (windows, front door) which do not distort the initial construction. It consists of a rectangular vaulted room, followed in the east by an elongated apse. 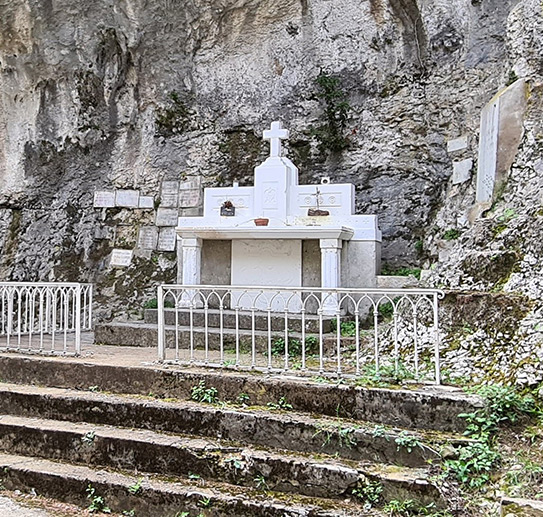 Besides their picturesque appearance, these places seem to have been frequented very early due to the presence of sources presence of Celtic pottery and remains of iron fireplace.

The most important source, which never runs dry, is called “the Fountain of the Fevers” (Montanus having communicated to him the virtue of curing the fevers); one sees it deaf under the road, at the height of the small dam.

It remained for a long time one of the main water points of the villagers, as evidenced by the path that connects it directly to the castle. The grotto of Lourdes was built in 1905 by the abbot Marqueyrol (former parish priest of St Montan), on the return of a pilgrimage to Lourdes, and until the 1980s, a religious service was held on August 15 followed by a pilgrimage to the cave of the hermit. Some miracles would have occurred there, as evidenced by the ex-voto near the altar. 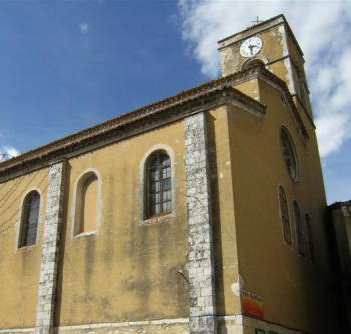 It is the church of the center of the village, built at the bottom of the old village. It was destroyed and rebuilt several times, rebuilt for three centuries; to such an extent that the early church had lost its artistic interest and was too small. It was demolished in 1856 and rebuilt. The building lacked funds, which explains the unfinished shape of its bell tower which remained flat. It was inaugurated in 1865. Of the primitive church, only the bells remain, an engraved inscription (sealed in San Samonta). Its cemetery was located at the current site of Place du Poussiac. 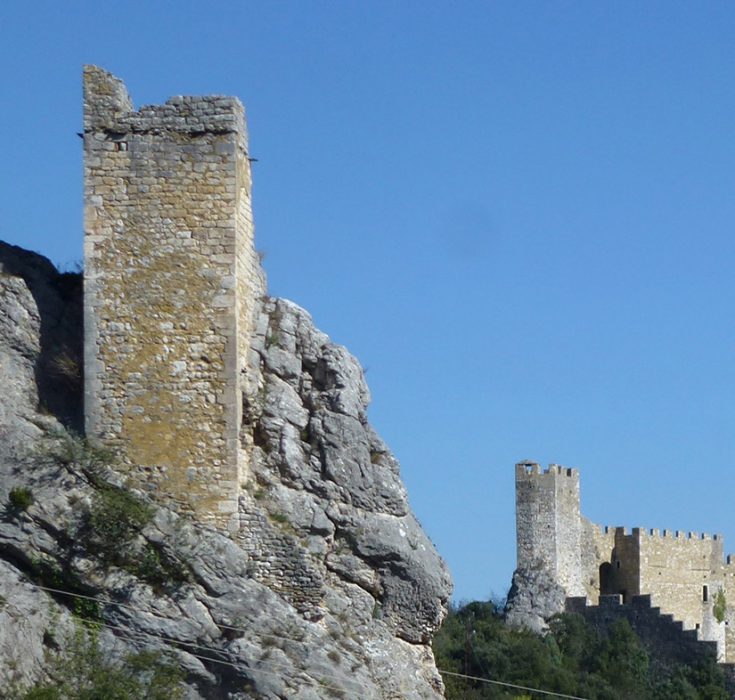 It is a tower, probably built in the 12th century, which was formerly associated with a building of which there are few traces.

This building housed religious who, like the nobles, had the right to raise pigeons. This tower was built as a dovecote, but it is possible, because of its situation, that it was also used as a refuge in case of difficulties.

Lieu suivant
Cave of the hermit 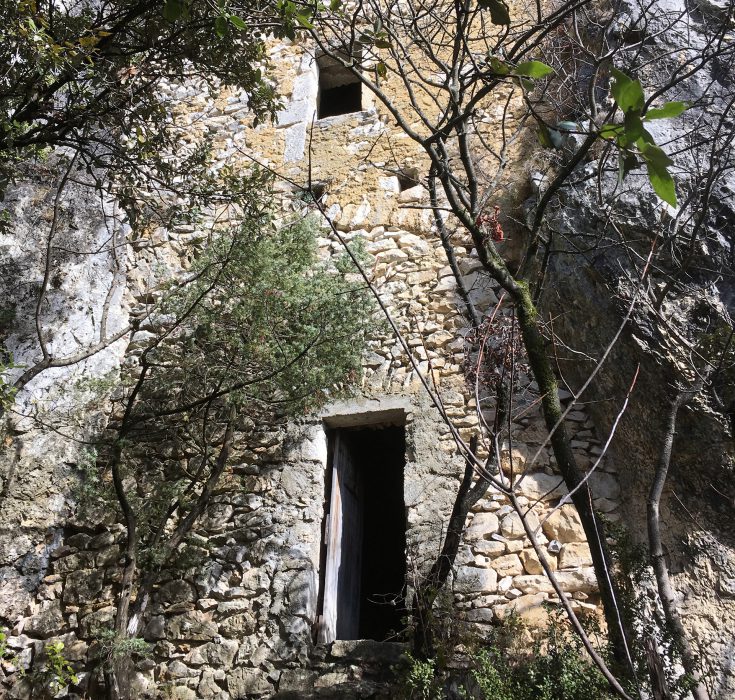 Cave of the hermit

To the west of the present village is a wild gorge with the presence of springs: an ideal place for an anachorete or solitary. Legend has it that in the fifth century, a pious person named Montanus withdrew to these places in prayer and contemplation; he would have come from the north of Gaul and predicted the birth of Remi, future bishop of Reims. Still according to legend, Montanus, after having stayed 30 years in this place, would have joined La Fère in Picardy where he died.

The building as it is now was built about 1000 years after the passage of Montanus… to protect a place of pilgrimage and ceremony that was still practiced in the 1980s on August 15.

Lieu suivant
Garden of the priest 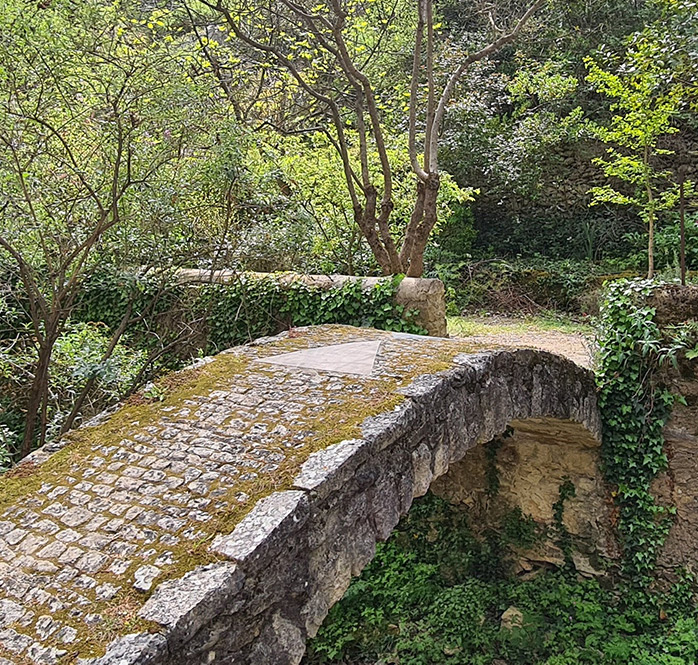 Garden of the priest

Owned by the diocese of Viviers, this garden was operated by the priests of Saint-Montan. It borders the hill of the “Grotto of Lourdes” which was still a place of pilgrimage until the 1980s, once a year, on August 15. Owners of churches since 1905, the communes must maintain these buildings which are made available to the cult.

The parish priest’s garden is located on an old site, hidden at the foot of a gorge overlooked by the medieval castle of Saint-Montan in Ardèche. This small garden is sheltered from the prevailing winds; it receives the water of the stream that crosses it and although it looks like a private place, this small green space with aromatic odors is communal and open to the public throughout the year. 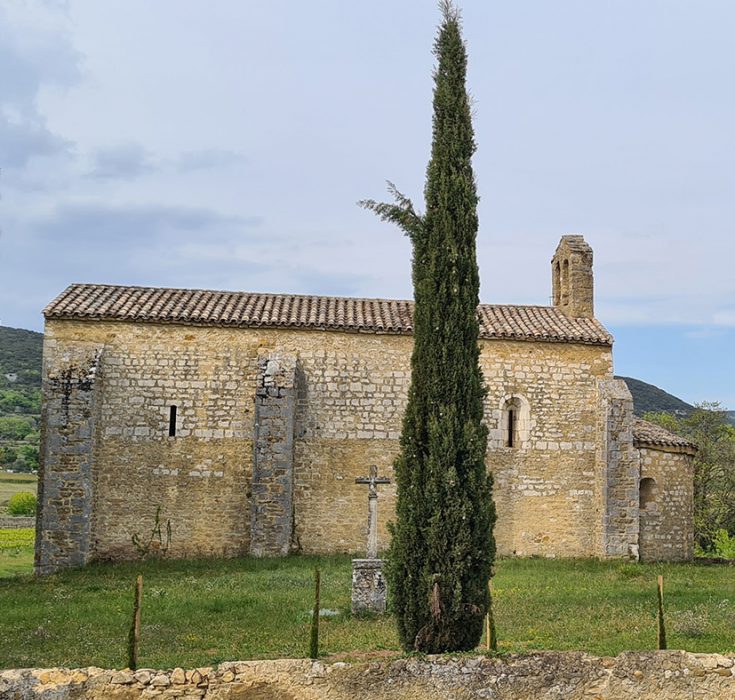 It is located on the D262 which connects the RD86 to the village. There is little documentation on the origin of this chapel. Its name indicates an ancient origin in connection with the shrine of the god Mithras, a Roman god whose worship is proven in the area.

It was very common to build buildings related to Christianity on pagan places of worship.

It is a Romanesque building with a single nave, completed in the twelfth century. The plot next to it, lined with cypress trees, is the ancient cemetery. Like all the churches in the area, it suffered the damage of time and wars still visible on the restored building.

Lieu suivant
The fountain of Portalet 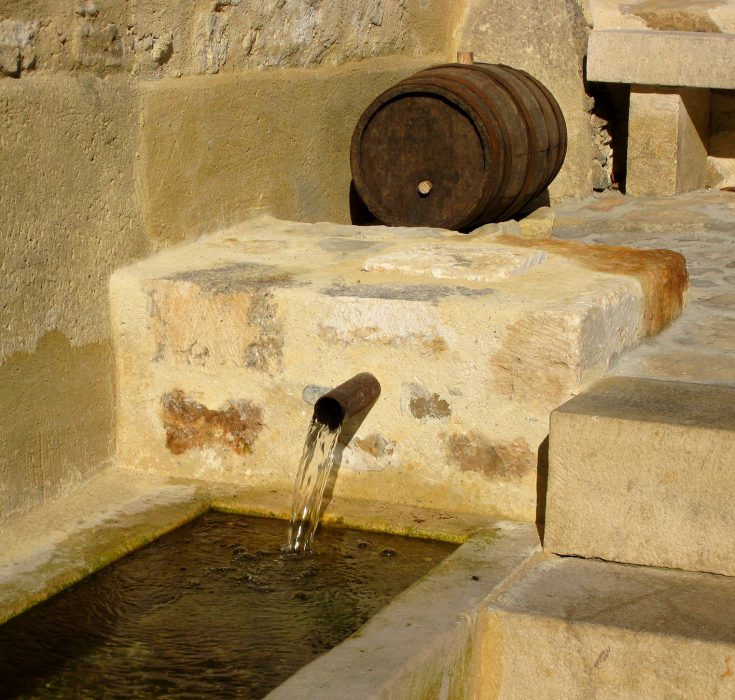 This fountain, whose water comes from a source captured 70m upstream, was for centuries the only fountain whose water was drinkable in the village.

It is fed by the same water table as the “source of fevers” located near the cave of Lourdes. 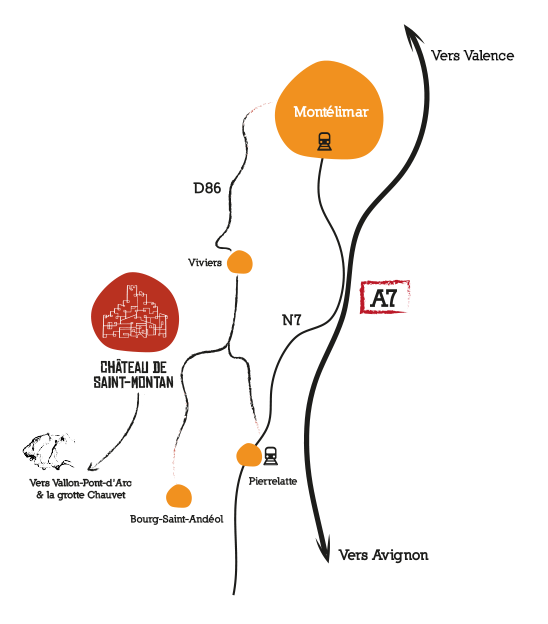